Bangladesh Premier League 2022 will be starting on January 21, 2022. BPL 2022 All Team Squad and BPL 2022 Bangladesh players list has been published. The arrangement has started with this new event in front of it. The first step is to tidy up the houses of the franchisees.
The player draft of BPL 8th will be held on December 27. After that BPL player list, 2022 will be published. You can live stream the player draft event of BPL 2022 on Gazi Television (GTV). Earlier, local and foreign cricketers who registered for the player draft, the list was published. There are 11 in the A category, 16 in B, 20 in C, 78 in D, 281 in E. A total of 406 people are on the draft list of overseas cricketers. The untrained name is scattered in the long list of BPL players' drafts.

In this article, you can find out BPL 2022 All Team Squad. Although the Bangladesh Premier League (BPL) is claimed to be the second top franchise-based tournament globally, BPL has the lowest position in the world T20 league. In the last edition, The IPL authority set the prize money for the champion team at Tk 28 crore, but in the eighth edition of the BPL, BCB set the prize money at Tk 1 crore. 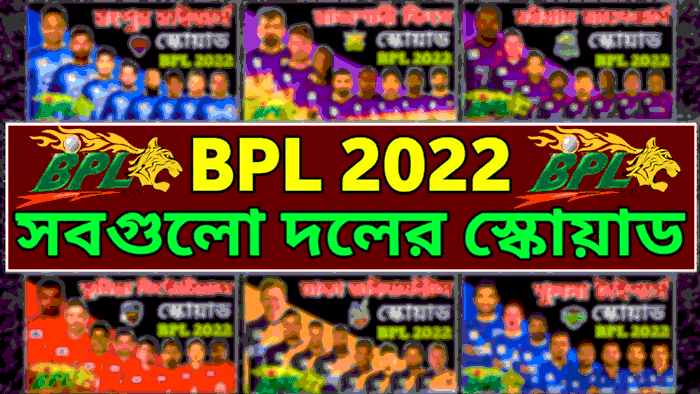 The BCB has officially announced the start date of BPL in a press release. The ownership of the six parties has also been announced. Barisal (Fortune Shoes), Chittagong (Delta Sports), Comilla (Comilla Legends), Dhaka (Rupa Fabrics and Marn Till), Khulna (Mind Tree), and Sylhet (Pragati Green Auto Rice Mills) will take part in this year's tournament.

BPL player list 2022 Price money and categories are published by BCB. A total of six categories have been made for domestic cricketers. There are 14 players for these six categories. In this category, maximum 70 lakhs, minimum 5 lakhs. The Bangladesh Premier League (BPL) player's draft or auction of players will be held on December 26.
The Bangladesh Cricket Board (BCB) has finalized the list of local cricketers for that. This time, the names of 210 cricketers in 6 grades have been included in the draft list.

There are five categories for foreign cricketers. Teams can take a total of one person from each category. The highest price is 84 lakh, the lowest is 16 lakh 20 thousand Taka.

BPL All Team Squad 2022 is available here. BPL 8th edition will be starting from 21st January 2022. Every cricket lover can watch BPL Live 2022 on deshi television Gazi TV and BD's first sports channel T Sports. Not only BPL Live, but You can also watch BPL auction 2022 on Gazi Tv and T Sports. After the BPL Player draft, the BPL All team squad will be published. In this session total of 6 teams will participate in BPL 2022. Now check this out BPL All team squad and players list.

BCB Dhaka is the Dhaka based BPL franchise team is owned by the Bangladesh cricket board. You can find here BPL Dhaka Team Squad 2022 both all deshi and foreign player lists. The Dhaka franchise decided to include Mahmudullah in the team first. After that, Tamim Iqbal and Mashrafe Murtaza were included in the Dhaka squad from the BPL Players' Draft. As a result, Tamim, Mashrafe and Mahmudullah will play in the same team. Tamim Iqbal is excited to get the other two national team teammates.

Fortune Barishal is the Barishal based BPL franchise team that is owned by Fortune shoe company. Here you can see the full Fortune Barishal Team squad 2022 for the 8th edition of BPL. Fortune Barisal has made a strong team for the eighth edition of the Bangladesh Premier League (BPL). The Barishal has completed the players' draft with several stars. Fortune Barisal team had included number one all-rounder Shakib Al Hasan. Direct signings also included Mujib Ur Rahman of Afghanistan, Danushka Gunathilaka of Sri Lanka and Chris Gayle of West Indies.

BPL Chattogram Challengers team squad and player list 2022 is available here. It is Chattogram based team that is owned by Delta Sports Company. Chittagong has arranged the team with the predominance of youth in BPL 2022 session. Chittagong Challengers have formed a youthful squad from the draft. This team was one of the strongest teams in the last edition of BPL. However, Chittagong did not play the game in the final due to a lack of luck. In this year's event, the team has filled the squad with cricketers in good form.

Here are some details of the eighth edition of BPL